Looking at that list I would understand someone thinking that everything is chaos and stress at Atooi Towers, but it is quite the opposite surprisingly. Sure, we’re busy. No doubt! But, everything is going really well with positive energy flowing through each project. Quite a contrast in emotion compared to my previous blog posts.

A lot of this for me is a matter of perspective. I have accepted the fact that I missed out on the gold rush that happened for the lucky indie devs who were allowed to release their games in the first 6 months of Nintendo Switch. Am I jealous? Yeah, totally. But, I am also genuinely happy for them. The launch window of a new platform is a short and exciting time to release new games. I was lucky enough to be a part of this with Mutant Mudds on the 3DS eShop. I tried to be a part of this golden time on Switch, but it didn’t work out. Hakuna matata.

I have also accepted the fact that I cannot and should not expect marketing support from Nintendo. My VIP membership has expired. 😊 And, that’s fine. Each business must do what it thinks is best for their own business. I am fully embracing that concept and focusing on what I must do for my own business without relying on others. Obviously, I wouldn’t say no to some help from Nintendo’s marketing machine, but it is healthier for me to assume it is not going to happen and forge my own way ahead.

I hope this does not come across as a rant, because that is honestly not how I feel about it. I am at peace with it, and I feel driven and energized to make my own independent path ahead. We have managed to release our current catalog of titles on the Switch and have new games on the way. Everything is going really well, and I am very thankful for that. 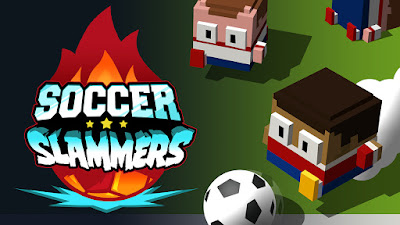 Soccer Slammers
We just finished up Soccer Slammers, which was a really fun project I created with programming pal Phil Elder. We first created a prototype for the game in June 2017. We spent about two weeks trying out different ideas to see what would work well. Initially I wanted to try it with no goalies, but that made it too easy and too simple. It lost that sense of mystery with shots on goal.

One of the first elements to get working right was the camera. We opted for a simple camera that does not move up or down, only horizontally. It’s like it’s locked on one of those rails that Spielberg would use to film a tracking shot in Indiana Jones! This combination of smooth, fast, and locked positioning shows off a great deal of the field, which does a good job of keeping track of most of the players in the game while staying focused on the ball.

The slam tackle went in pretty fast and felt good immediately. It was a balance of getting the slam speed, duration, and the period of time the player is static at the end of the tackle to produce a good sense of risk and reward when performing the move. Slamming someone and stealing the ball feels great.

The player movement speed and sprint took some finessing to present a nice feeling of jogging at default speed and really feeling like you rocket off when using sprint. A parameter of this was also the sprint meter, which controls how much the sprint can be used and not abused. When we got the smoke trail behind the player working properly I was very happy. The goal was to capture a similar feeling to the smoke trail in Super Mario 3D World, and I think we got pretty close.

Massaging all of these elements together to form a cohesive experience was a ton of fun, and it came together very well over a short period of time. A lot of my inspiration came from a combination of NBA Jam and Speedball and seeing how that gameplay could be adapted for soccer. Working with Phil was very easy and fun. That really helped the process go well. Positive attitudes go a long way.

We didn’t return to the game until late January 2018 – after Totes the Goat was submitted to Nintendo Lotcheck for approval. Since then, we’ve been hammering on Soccer Slammers pretty hard to finish up and polish the gameplay experience and add the structure of the different modes and features. We submitted the game to Nintendo Lotcheck on May 9, 2018. It was approved on May 17, 2018. We got lucky. That’s a very fast turnaround! 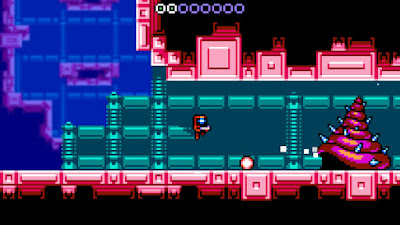 Sales Promotions
During the first few months of 2018 I decided to put all of Atooi’s Nintendo Switch games on sale. The timing for Mutant Mudds Collection felt natural (3 months after release), while the timing for Xeodrifter and Totes the Goat was a bit quicker than normal. Due to the nature of the Nintendo Switch eShop market and the fact that both games are direct ports, I felt this was an acceptable move to make. Not something I would be eager to do with a new original title on Nintendo Switch (read: Soccer Slammers will not be going on sale as quickly). 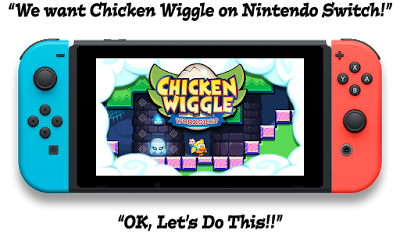 Chicken Wiggle Workshop
To throw a Kickstarter campaign in the midst of all this development activity could have been a disaster, but Chicken Wiggle Workshop was the right kind of campaign for that moment. I felt that if the Kickstarter video and the Kickstarter page effectively presented the concept of the campaign, then it had a chance to have an explosive start with a steady middle period and a spike towards the end, which is very common for successful Kickstarter campaigns. Thankfully, this is what happened.

It was a simple proposition: do you want this 3DS game to be ported to the Nintendo Switch with fancy new artwork and possibly a stretch goal that adds a sweet orchestral soundtrack? If the video and page showed off the qualities of the original game and what it would look and sound like on the Nintendo Switch, it left the viewer with a simple yes / no answer. 1553 people said yes and raised $35, 634. Wow! Amazing!! A huge thank you to everyone who supported the project. I’ll have some delights to share on our progress soon. 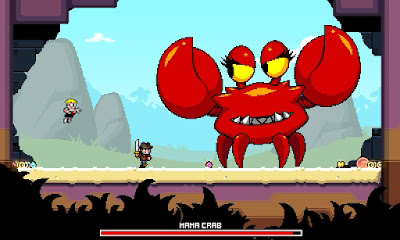 The current task is moving all of the original goodness over to Unity. We want to get everything working on Unity for many reason, but the short version is that it makes everything simpler, quicker, and easier for us in the long run. Progress on this is going really well. I will join Phil in creating new content for the game soon, which I am very much looking forward to.

Each time I return to the development of Treasurenauts it is a wonderfully interesting experience. I spend a little time getting reacquainted with everything. It’s like going to the pub with old friends you haven’t seen for a while. After the first pint it’s just like old times and everything comes rushing back like no time has passed at all.

What’s really nice is that I have been able to bring my new experiences to Treasurenauts on each of my revisits. I haven’t been able to do that with any other game. Sometimes it is a small idea or detail, and sometimes it’s a big change that fits perfectly into the big picture, improving the overall concept.

My vision for the game is clear. It’s just a matter of making the time to finish it and finish it well. I know it will be a really fun game. It will probably be the best 2D platformer that I have had the pleasure of working on to date. That’s why I don’t want to rush it out for the sake of it. It will be done when it’s done, which will not be 2018 unfortunately. It will offer a bright shiny piece of treasure for folks to look forward to in 2019.

Secret Project
We are developing a new secret game. It is for Nintendo Switch and will release sooner than you may expect! It’s sort of new territory for me, and I am very excited about it. It is not connected with any other Atooi property. It is completely new. It is my hope that it leverages two future public events and benefits from its connection to them. How’s that for a cryptic clue?

New Focus
My focus for the foreseeable future is to try and be more mindful of the games that Atooi publishes. The two simple goals for each game is 1. High quality. 2. High sales. That is nothing new. But, how those goals are achieved differs greatly from project to project. Soccer Slammers was a case of making a fun arcade soccer title to coincide with the World Cup. I believe the game is high quality, and the soccer theme of the game should align well with the World Cup fever. Whether that is a recipe for high sales remains to be seen.

More Secrets!
I have one other exciting secret for 2018, which should be happening sometime between June and August. I have done something similar to this in the past, which was successful, and I hope this works out well too. I run the risk of setting high expectations for myself, but I think the dangers are somewhat limited with this one. Fingers crossed! More news soon.

Oh, and if you like watching videos, here's a VLOG entry I made recently: