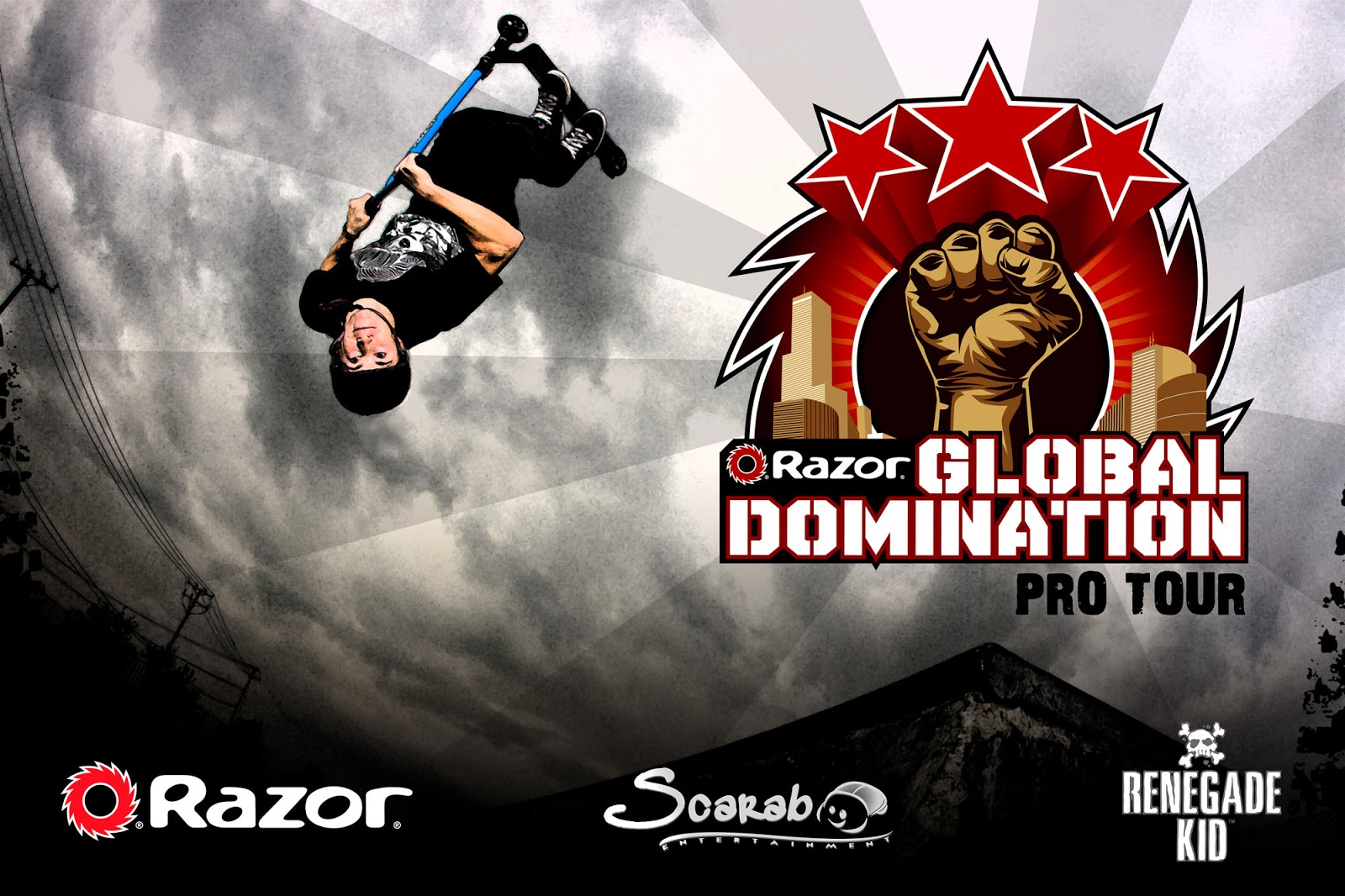 Razor® Global Domination Pro Tour is a robust freestyle scooter experience, where you flip grab, spin, and grind your way to victory by performing dozens of freestyle scooter tricks. Customize your apparel and gear to personalize your Team Razor™ rider. Enhance your performance and take your Razor® scooter to new heights with special upgrades that award you with increased speed and extra airtime. Travel around the world visiting unique skate parks, street jam sessions, and dirt tracks to demonstrate your skills.

"We're thrilled to be working with Scarab and Razor to develop a freestyle scooter gaming experience that compliments the authentically cool brand that Razor has established over the past 14 years," said Jools Watsham, Co-founder and Director at Renegade Kid.

“Renegade Kid was the perfect candidate to help us translate our vision for Razor to the next-generation consoles, and we are honored to have such a talented team on board for this project,” said Karim Farghaly, Founder and CEO at Scarab Entertainment.

Razor® Global Domination Pro Tour will flip, grab, spin, and grind its way onto home consoles in 2015, and is slated for Xbox One, PlayStation 4, and Nintendo Wii U. Head over to www.scarabentertain.com for more details soon.


About Scarab Entertainment – www.scarabentertain.com
Founded in 2012 and based in Austin, Texas, Scarab Entertainment is dedicated to making quality apps and games for the whole family. The team consists of industry veterans with over 30 years combined experience developing and publishing interactive entertainment for the likes of Interplay, Sony, Acclaim, Sanrio and others. Scarab has a passion for casual content, a background in iconic pop brands, and a knack for creating award-winning experiences on mobile, social, consoles and handheld platforms.


About Renegade Kid – www.renegadekid.com
Founded in 2007 by Jools Watsham and Gregg Hargrove, Renegade Kid is an award-winning independent development studio based in Austin, Texas. A developer of home console and handheld video-games, Renegade Kid is known for its critically-acclaimed titles including, Dementium, Moon, ATV Wild Ride, Mutant Mudds, and Bomb Monkey.


About Razor USA LLC – www.razor.com
The Razor brand embodies the spirit of fun and freedom.  It defies boundaries and sometimes even gravity. The company was founded in 2000 with the introduction of its now legendary kick scooter, which quickly became an essential ride for anyone on the go. Today, Razor products are available worldwide, with a full range of wheeled goods to inspire and excite riders everywhere, including the 2014 Outdoor Toy of the Year, the Crazy Cart. Cool products and great value have distinguished Razor as a trusted global brand and industry leader.
Based in California, USA, the company sponsors Team Razor, a group of pro scooter athletes.  Razor has helped usher in the action sport of freestyle scooter riding, which has evolved from local skate parks to global competitions and tours.  For more information, please visit www.razor.com.


Trademarks are property of their respective owners.
Posted by Jools Watsham at 3:41 PM