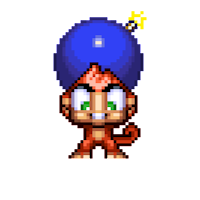 Blok Bombing is a fine and ancient sport invented by a small and creative troop of primates, called Bomb Monkeys. The goal is simple: do not allow the bloks rising from the jungle floor to reach dangerous heights and knock you from your perch.

With an endless supply of bloks and a steady stream of bombs, you can partake in this legendary sport anytime you have a spare moment. Young Bomb Monkeys will learn patience and strategy. Older Bomb Monkeys will sharpen their wits. And, every Bomb Monkey will have a blast!

“We’re thrilled to be releasing our second title on the Nintendo eShop,” said Jools Watsham, Owner and Director at Renegade Kid. “A special feature of Bomb Monkey that I am particularly excited about is the two player mode, which can be enjoyed with just one Nintendo 3DS!”

About Renegade Kid
Founded in 2007 by Jools Watsham and Gregg Hargrove, Renegade Kid LLC is an independent development studio based in Austin, Texas. A developer of handheld video-games, Renegade Kid is known for its critically-acclaimed titles including the Dementium series and Mutant Mudds.
For more information on Bomb Monkey, visit www.bombmonkey.com.

Nintendo 3DS is a trademark of Nintendo. 2011 Nintendo.